The manufacture of didgeridoos, from traditional to modern, what to do ?

” The didgeridoo has evolved in more than 25 years… and in an incredible way ! ” 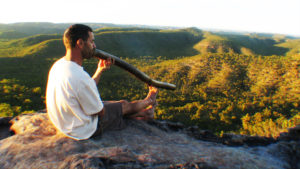 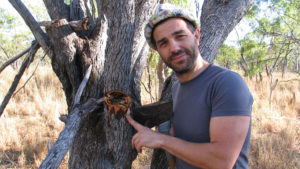 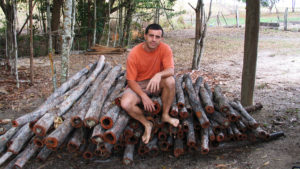 Let’s first take a look at the origins of the didgeridoo :

The didgeridoo is around 20,000 years old. It is certainly the most “simple” instrument that the human being knows so far, because it is an instrument without mechanics… endowed with only one column of air… quite simply !

The didgeridoo is a eucalyptus tree whose core is eaten and hollowed out by termites, while still in the ground and alive. This phenomenon is happening in the Northern Region of Australia only. Then, intervenes the hand of the man, who will cut this tree at the base, then keep the trunk which is thus “hollow”, to make a didgeridoo by going through the following manufacturing steps :

– The cut ; the drying period (approximately 6 months to 5 years); cleaning and phytosanitary treatment ; remove bark, planing, sanding ; application of the mouth of beeswax, wood or other materials ; give the instrument score ; varnishing and polishing.

Originally, there were hundreds of aboriginal communities in Australia. For the tribes concerned, that is to say those of the northern lands of the south, the name “Didgeridoo” was born during colonialism. Names such as “YIDAKI“, “MOLOO“, “IHAMBILBIG” and many others define the name of the didgeridoo in various Aboriginal dialects. Westerners write it differently, like Didgeridoo or Didjeridoo.

Among the aborigines of Australia, the didgeridoo is an instrument used in rituals called “Corroborées“, which are sacred moments when aboriginal tribes sing and dance paying homage and thanking our planet. Several dances such as “Kangaroo dance“, “Eagle dance” etc. are mentioned. I suggest you go to the excellent website YIDAKIWUY DHAWU to learn more about the origins of Yidaki and in particular the culture of the Aboriginal tribe YOLNGU.

The player vibrates his lips to obtain the basic fundamental note, wich is a vibration (also called “drone or drone”). Then he will add extra sounds with his tongue, throat, voice and diaphragm mimicking the surrounding nature accompanied by appropriate rhythms.

The longer a didgeridoo is, the more serious it will be. The sound of the didgeridoo corresponds to a note (C, D, E, etc.). It is also used to treat certain diseases or stress, such as sleep apnea. Some people have stopped smoking thanks to this instrument of the night of time !

Question to Raphael : You are the pioneer of this instrument in France. Did you observe a change in the production ?

– ” Oh yeah !!! The didgeridoo has evolved so well in 1995… and this in an incredible way ! France is full of enthusiasm for the evolution of the didgeridoo… so the challenge is permanent and mandatory! Otherwise, evolution can leave us on the floor !

That’s why I decided to mix “Modernity and Racine“… which led me to develop my last Didgeridoo productions of the series “TESLA DIDGERIDOO“, in tribute to the great researcher Nicolaï TESLA who wanted to distribute electricity for free to the world… it would have been great and crazy no ?! So I look and observe for years the evolution of my friends manufacturers… and my questioning was total, believe me ! And this thanks to all these new didgeridoo “explorers” luthiers of the new generation. But deep inside me, something told me that I could link modernity and root… but how ?

And it was during my trip in 2018 in Australia that everything was enlightened… thanks to meetings and exchanges of discussions about the projects, and of what animates us between friends and in life. It is during these intimate moments that ideas are born… and we come back loaded with new things necessary to continue…

That’s where came the idea to create and develop my new series of didgeridoo that I named “TESLA DIDGERIDOO“… with parallel courses that I did with a friend luthier , who taught me the complex techniques of old-fashioned vernissages called “varnish with the stamp or lacquer” as the luthiers practice on their instruments that are the violins and the pianos… which give a visual and an incredibly touched beautiful and sweet… and it’s really blast class !

Of course, I always do more traditional didgeridoos we’ll say… with beeswax mouthpiece or wood, with the body of the natural colored didgeridoo, without the dendrites of the TESLA series. I like to adapt to the desire of everyone, so that the player is comfortable and happy to play his didgeridoo ! “

Interviewed by Laurent and J.C Decalone for FEELING MUSIC.

Every years, Raphaël Didjaman flies to the North of Australia, the only region in the world where this phenomenon occurs in the bush, eucalyptus trees are naturally dug by termites during its growth. It collects and collects the world’s highest quality wood, in order to obtain instruments with high acoustic quality. After the season of “cut”, back in France, he makes his didgeridoos in his workshop and ensures the respect of the particularities of wood by faithfully following the techniques of luthiers. Each instrument is unique…

The quality of its craftsmanship makes it possible to offer you instruments of excellent quality, which will satisfy the most demanding players. Go to visit the SHOP the qualities of production of a didgeridoo coming from Australia, and this since 1995…

Any Questions ? Do not hesitate to contact Raphaël to get your answers, please !

Let’s first take a look at the origins of the didgeridoo: 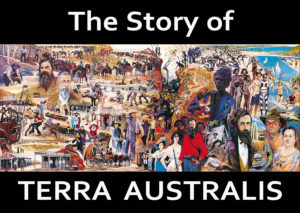 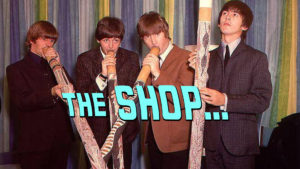 Check out the BLOG !

Come chat about artists and instructive subjects… just to get your opinion ! 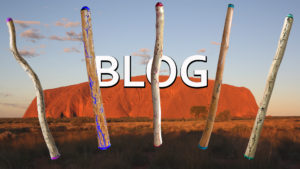