I remember the live performances of LIES BEIJERINCK at festivals in the 2000’s… with her cutting-edge techniques and the punch she sent in her didgeridoos… impressive !

Lies is a didgeridoo player who is part of the first generation of European players. Originally from the Netherlands, it will bring the “uncompromising” side of the didgeridoo. That is to say that when she is on stage, she sends the steak as we say.

Which led me to think that it looked like a sort of feminist who expressed “his pride in being a woman” through a typically male instrument. Because remember that at the time “white” people confused instrument and belief !

But let her speak, because she is already bubbling to answer questions !!!

Hello everybody, my name is Lies Beijerinck, and I have two artist names :

Didgeridoo is my main instrument, but I love loads of instruments, like NGONI (I’m following online lessons with Frank Heinkel at the moment). My first love was the Harp, so I now play a different version of it, it feels like. Ngoni is an African bass-Harp.

And I also love my Mouth-Harps, hahaha Harp again ;-). African percussion I play with my amateur band ‘Masongo’.  Finally I sing in a improve choir ‘Genetic Choir’.

It was in 1993, I was studying at the Art School (sculpture) at that time. A friend and I were eating in this courtyard of this underground hipster restaurant. This is when I heard the Didgeridoo live for the first time !

I was fascinated by the sound, I felt super excited and curious ! I really wanted to try this incredible instrument and of course, not being shy myself, I asked if I could try !!!

There was a guy named Lerant who brought pvc didgeridoos to sell them at a music festival in Belgium (my student city was Breda, it’s near the Belgian border). The plastic didgeridoos were beautifully painted and had beeswax mouthpieces.

He let me try one and told me to buzz my lips. When I tried, I managed to get the sound right away and I immediately fell in love with the feeling of playing ! I think I forgot everything, I don’t remember eating and I probably played for about two hours. I couldn’t do much, just a few sounds of EEEEEE-OOOOO, but I loved it, and I was addicted to producing these vibrations right away !

I did a lot of busking in the 90s on the streets of Amsterdam. At the same period of time, I worked at the Didge Shop “Aboriginal Art & Instruments” starting from 1994. A didgeridoo scene developed around this store, and that’s where I connected with many players. Also most were famous like Alan Dargin (who became a friend and was my first inspirer), Mark Atkins, Si Mullumby (also a very dear friend who had a huge effect on my rhythms), Ganga Giri and Charlie McMahon to name a few.

Then 3ple-D was my first “serious” band, founded by my Didge brother Michiel Teijgeler (aka Mt-Yidaki) and myself. Percussionist Terence Samson joined us later. Two Didgeridoo players and a percussionist (Didge Didge Drums, that’s why we called ourselves 3ple-D, maybe a nice detail to know).

So we made two albums: “High from the Lowlands” and “Zumo” which came out in 2003, and at that time well received because he was so Didgeridooeee ;-). I still love the songs on it and I am so happy to have created it together. With these two brothers, we toured a lot around the world, playing in all kinds of festivals.

In 2018, we, Aura Rascón Becerra and I, released our first CD as a duo SANSZUS. Our album is called “Area, tales of a breathing planet”. It is a beautiful album with the magical dreamy sounds of the Bansuri (Indian bamboo flute) and the earthy vibrations of the Didgeridoo. We created, I believe, seven very distinct songs with only these two instruments. A funny detail is that we had already recorded the songs in 2014, but with the mixing, mastering and writing of the booklet, it took us four years to release it. Ooooops, it was a long delivery, hahahaha !

Another group that I toured a lot with was called Loonaloop who is based in Australia. The first time we met was already in the 90s. On one of their albums, “Skipping Stones”, you will hear me on most of the songs !!! If you like positive dance music, go for it :-).

With the contemporary classic Hertz Ensemble, of which I am a part, we were supposed to record an album right now, but because of the Coronavirus, it is postponed. For all the other albums that I was part of, I was basically a paid session musician.

With 3ple-D, it was probably around 3 to 4 years ago, it’s been so long since I can’t remember it. Well, memory is no longer my thing, after some concussions.

Fun fact (well, not so much fun for me actually), I had two concussions because of a fall of Didgeridoos on my head. So watch out for the flying Didgeridoos !

With SANSZUS, around 6 years, but yes it was because of the delay in release… and with Loonaloop, probably around 15 years.

Yes, I have been asked to do it several times for several years. But yes, the time… luckily, I was always busy playing and teaching all over the world, so I never found the time to do tutorials. So this stay at home gave me time to do it… a kind of a blessing in disguise.

I love sharing my knowledge, so it makes me happy to make these tutorial videos. My plan is to go from total beginners slowly to super advanced techniques. Every Monday I will post a new video. Therefore there will be a series of chronological tutorials for each level. I’m so excited about it.

Hopefully these videos will stand out from all the others. Because of the fun and very useful qualities ! Big smiles to all !!!!!!!!

I do think the video and online lessons are for now and the future. Now our world is small (staying at home small) but also globally (www.internet.com) ;-). I can see it in my online lessons, for example, no matter where you live, that you can have courses with whoever you want, around the world. And I think it’s cool ! Now I have students in Germany, South Africa, South America, Spain and the United States. And nobody needs to travel, take a plane, a train or a car (it’s better for the environment too). I like that because I can also practice my language skills. My Spanish and German are not excellent, but I teach in these languages, she writes proudly 😉 hahaha…

“Love and light” is my motto. I try to be in a good state of mind and in good physical health, so I can put positive vibrations in this world !

I have just started my new group Arches Ensemble, we have done some nice concerts. The musicians are really the musicians I want to work with because they are all excellent musicians, first of all. Second, they love and excel in improvisation. And finally, what is very important they are easygoing and charming people. Clara de Mik is a professional drummer, but also plays a lot of (melodic) percussion. Lucas Stam is a professional cellist, who also loves percussion. Terence Samson is the master of groove, playing all kinds of percussion and a little bit of Bansuri.

We are all inspired and influenced by music from all continents. Persian, African, South American, Australian, Irish, Indian to name a few. There are so many rich and ancient musical cultures around the world and we are all happy to learn more every day.

Bringing my tutorial videos onto YouTube never felt as an effort or sacrifice. I will buy a video editing program, so I can make them better! Maybe next month I will have some money to spare and hopefully you will see my video (visually) improve. Also I am quite new at this,  hopefully I will improve in general. So I hope you will Subscribe, Share and like my videos.

Sometimes what is difficult for me, is the comments about women not being allowed to play. But I think, it is my cross to bear, being a prominent female player.

So many great memories, it is difficult to choose one !!!  The moments when everything clicks, you are together in the moment, you are already responding to what someone else does, you are really completely connected in music. That is, I believe is the best drug there is. So every time you find this, is the biggest joy.

I’ll try to describe it in a different way : There is no you or them, there is only music/vibration. Only now, only this moment and you all are completely connected, all one. No struggle only vibrations.

For instance, I remember having perfect sound (on stage) one time at ‘le Rêve de l’aborigène’, and we (3ple-D) were going off 🙂 !!!

Ooooh sometimes when you are recording and you can’t get it right, time after time. You get tired from being super focussed. You get even more lost. This is pure frustration. And live concerts, it is sometimes super hard work when you can’t hear the people you are playing with, or all is sooooo so load it hurts your ears. So you can’t get into any vibe. This makes me want to cry every time.

This is what happened at ‘Boom’ festival in Portugal. I really did cry after our performance. The whole show was just about trying to get our sound a little okay, but we never managed it.

With my tutorials, I would suggest starting from video #1 (even if you are quite an advanced player). Because you have to cover all the bases (or really, make sure you can’t improve more these fundamental techniques) before moving to advanced techniques.

I notice, 99% of my online lesson students we have to work on basic techniques first, like breathing, or even lips.

With concerts, be open to be surprised 😉 ALWAYS !  Be patient because you might miss the part where it is truly wonderful/magical… 😉 hihihihi.

So here is LIES… this little woman who started playing didgeridoo in Europe in the 90s, when people cried out that it was forbidden for a woman to play. To which I always replied that it concerned only the Aboriginal womens and not the other womens of the world. Remember that the Aborigines of Australia have a culture and beliefs different from ours… quite simply !

And then go say that to a woman of character like Lies precisely… it would lead to a very interesting discussion I think ! In any case, Lies is this kind of artist and didgeridoo teacher who will have allowed me to better see and understand what is going on in the mind of a hyperactive woman ! Thank you Lies !!!

For festival organizers who love women when they make the show… it is clear that LIES BEIJERINCK will inspire your audience… promised !!!

About the Author: Raphael Didjaman

Raphaël Didjaman was in first saxophonist and Deejay until the age of 27, he gave up everything one day to go to Australia. On these original lands, he discovered the didgeridoo. Listening to aboriginal rites, he felt that this instrument would be at the heart of all the changes that his life would experience... It was in 1995. 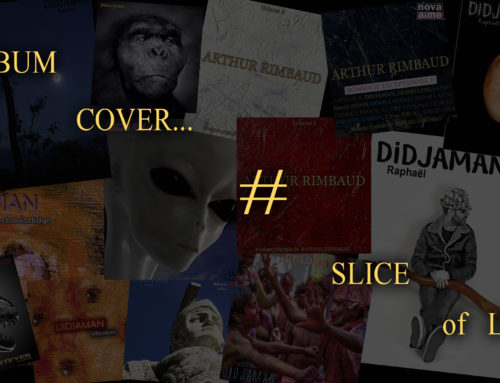