It’s been more than 20 years since I met the didgeridoo. I feel like it was yesterday ! This was crucial for me and it came at the moment when I was wondering what would be my future. I did not miss work, but I was tired of evolving in a consumer society that did not fit me anymore. This situation pushed me to go far, far away !

Australia was a dream since I was eight years old, a distant and inaccessible country that I was looking at on my school books, while there was very little talk about it in class. I knew there were weird and dangerous animals. And it is the image of this Australia which intrigued me, which attracted me.

At the age of 27, thanks to surfing and the desire to take airplanes, I wanted to overcome my fears and to embark on the adventure in “Globe-Trotteur” mode to the so-called dangerous and inaccessible continent… which is a completely preconceived idea when I think about it today. Of course we do not play and we should not risk doing anything… but that’s all over the world I think… just love life to think no ?!

Arrived there in Australia, I discovered the Aboriginal peoples and their history oh so painful ! The approach and the contact were not easy and did not happen at one time. But over time, I sincerely linked with some of them… and with the discovery of rituals, their paintings, traditional instruments and musics like the didgeridoo, the claves, the rhombus, the boomerang, traditional dances and songs. So I quickly became passionate about this universe, and I never stopped to learn more about didgeridoo and its origins. It was there that I was surprised to learn that the didgeridoo was only played by the aboriginal tribes of Northern Australia, because termites do not eat the heart of Eucalyptus trees in the rest of the country…

The return to France was a shock ! I had a hard time leaving the great Australian spaces to live again in Paris. This is where the real challenge began, because we had to believe deeply and not lose my beliefs. My determination got the better of the critics, even though it was not always easy to deal with some misconceptions. I confess that at that time, having understood that the media here in France, could perhaps help me to extend my vision of this ancestral instrument, which I have always found noble, was a real trigger and encouraged me and the desire to go further in my approach that is not so easy as you can imagine.

Learning more and transmitting to others gives me a powerful energy and a positive feeling that allows me to continue on this path.

Today the didgeridoo integrates with other music, poetry, cinema, and festivals are held every summer only for the didgeridoo. Groups are forming and signing on record companies, which is positive !

The didgeridoo is becoming increasingly important in our western society, slowly but surely. And with a little patience, we will have the opportunity to see beautiful and big concerts with known and recognized didgeridoo players.

This instrument will take 20,000 years to cross the oceans, we will take the time to get to know him ! 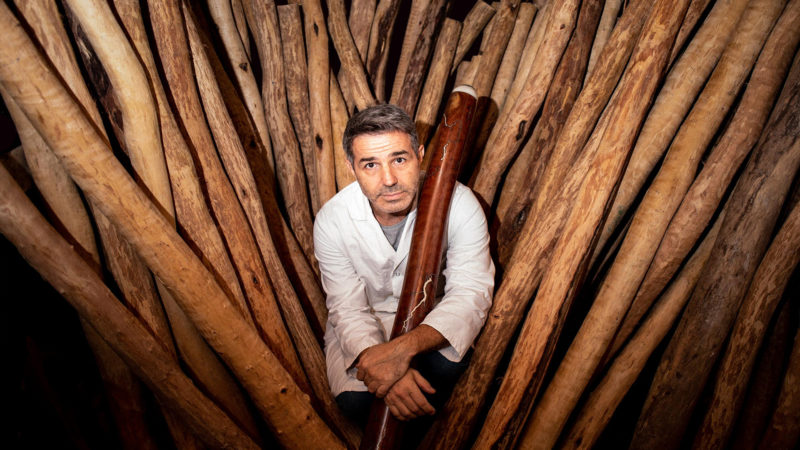